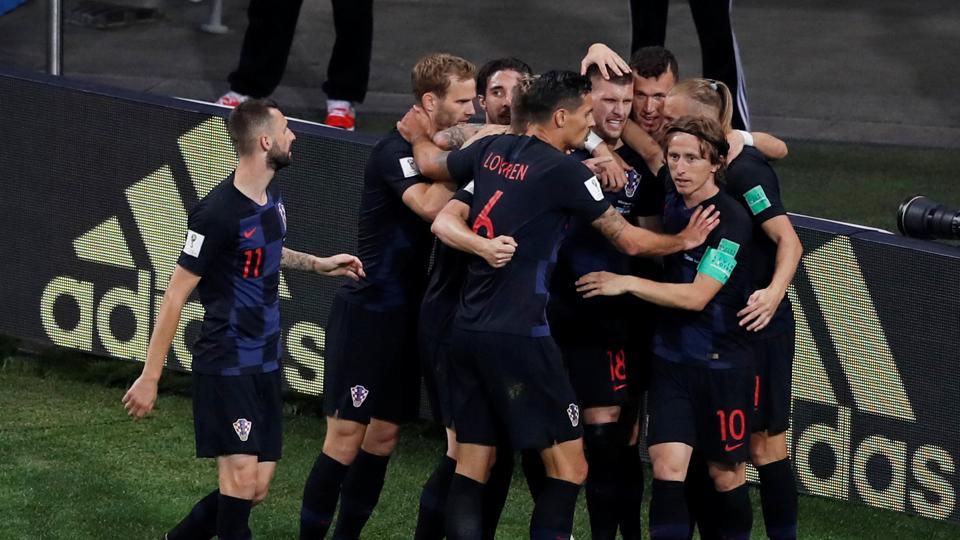 Croatia have created history by thrashing Argentina 3-0 and booking their spot in the last 16 of the tournament. Goals from Ante Rebic, Luka Modric and Ivan Rakitic have given Croatia a big win over Argentina, who now face an uphill task in trying to stay alive in the race for the next round. This is Argentina’s heaviest loss in the league stages of the World Cup since 1958. Get highlights of Argentina vs Croatia, Group D of FIFA World Cup 2018, encounter here

01:30 hrs IST: This is Argentina’s heaviest loss in the league stages of the FIFA World Cup since 1958, when they were thrashed 6-1 by Czechslovakia. Lionel Messi’s side now face an uphill task in their last game against Nigeria.

01:23 hrs IST: Shambolic defending from Argentina. They were waiting for the off-side flag but it never came. Rakitic puts the game beyond doubt as he scores in the 90th minute to complete the thrashing.

01:13 hrs IST: Rakitic takes a wonderful free hit but it hits the post and then he fails to convert the rebound. It is still 2-0 in favour of Croatia.

01:12 hrs IST: Ugly scenes. Rakitic has been tackled down and Otamendi nearly kicks him in the head. An ugly scuffle ensues and Otamendi is given a yellow card. Should have been a straight red, one feels.

01:09 hrs IST: Sublime! Brilliant! Stunning! Luka Modric has potentially landed the killer blow for Argentina with a stunning kick from a long range shot. It is a curling effort and Willy Caballero has no chance in the 80th minute. It is 2-0 to Croatia against Argentina

01:03 hrs IST: Rakitic is down after he collides with Otamendi. Play is continuing but Rakitic continues to stay down . Finally, the referee relents but the Argentinian players are not happy and are indulged in an argument with the Croatian players.

01:01 hrs IST: Messi is absolutely frustrated and he almost commits a foul. Argentina have to keep their cool.

00:58 hrs IST: Dybala has a long range shot from the left flank but it goes well over the post. Argentina have made the substitutes and they have speed on both the left and the right flanks but somehow they are not able to convert their chances.

00:53 hrs IST: Madzukic has a chance on goal but it is wide to the right of Caballero. No damage done but this match continues to swing like a pendulum.

00:52 hrs IST: Brilliant football being played at the moment. Subasic, the goalkeeper, has a great save as Higuain scores at close range. Messi tries to get a tap in but it is wide of the post. Superb defending. Argentina are building the pressure.

00:50 hrs IST: Messi and Mascarenho are desperately trying to get Argentina back on level terms but Croatia are defending with all their skill. This is a tense passage of play for both sides.

00:46 hrs IST: Madzukic gets a yellow card as Croatia look to dominate possession. However, the next 30 minutes are going to be crucial for Argentina. If the result stays like this, then Croatia are through to the last 16 while Argentina’s prospects take a serious hit.

00:44 hrs IST: Pavon comes in to replace Salvio for Croatia as they get a corner. This time Caballero clears the ball well and Argentina hang on. However, it is advantage Croatia.

00:41 hrs IST: Disaster for Argentina! Cabellero clears the ball in a horrible way and Rebic pounces on the opportunity to net the goal. This was just after Gonzalo Higuain mad a substitute, replacing Sergio Aguero

00:38 hrs IST: Argentina are trying to play aggressively and are creating more chances, but a hard tackle by Mercado earns him a yellow card.

00:30 hrs IST: We are all set for the second half to begin. Argentina will be determined to get off the mark while Croatia will be aiming to convert their chances. This is a crucial game for both teams as a loss could dent their prospects.

00:17 hrs IST: Modric creates a wonderful chance from the left wing but Rebic loses control and in the end, he puts it over the post. Half-time is up and it is 0-0 between Argentina and Croatia. Both sides had their chances but they failed to capitalise.

00:09 hrs IST: Rebic gets a yellow card for a bad tackle on Salvio. Jorge Sampaoli is furious and he is wildly gesturing close to the touchline. That should have been more than a yellow, one feels.

00:07 hrs IST: Slight halt in play as Mercado is getting some treatment. He fell down really badly and he is being assisted off the pitch.

00:02 hrs IST: Mandzukic has a header and he is in a bit of space but he hits it wide. However, it was off side so it would not have counted for Croatia. Both teams are creating chances.

00:00 hrs IST: Yikes! Croatia almost commit harakiri. Enzo Perez has a chance to net the goal but he misses. That was a golden opportunity for Argentina but they fail to capitalise on some poor defending from Croatia.

23:57 hrs IST: Both teams are vying for possession and Argentina are creating chances. Sergio Aguero has a good run and once again, Argentina get a corner thanks to a deflection. The referee is having a word with Otamendi. The corner is taken but it is a poor one.

23:49 hrs IST: Argentina have controlled the game and are dominating possession with 67%. Sampaoli’s 3-4-3 tactic is really working well as Croatia defend well.

23:44 hrs IST: Ooohhh! Messi creates a chance in the 12th minute. Tears down the left wing and fires an angled shot but the ball sails over the post. Argentina build the pressure and Mesa has a short at goal but it is deflected and Argentina cannot convert the corner.

23:40 hrs IST: Croatia are ensuring Lionel Messi is subdued and he is not given a chance to boost Argentina. The likes of Aguero have another tall task.

23:35 hrs IST: ALMOST! Perisic has a good run and it takes a great save from Willy Callabero to keep the stalemate active. A corner for Croatia but they do not capitalise.

23:29 hrs IST: The national anthems are done. The line-ups have been announced. Big moment in Group D and also of the World Cup. Game on.

23:24 hrs IST: In the game played on June 21, 2014, Lionel Messi had scored a late goal to give Argentina victory against Iran. Can he do the same today? The national anthems are being played. Approaching close to game time now.

23:14 hrs IST: Confirmed. Di Maria has been benched. He might have a role as a substitute as the game progresses.

23:12 hrs IST: Rakitic and Modric will be the key for Croatia in this game. By the way, a very interesting stat from FIFA. Argentina have played five games on June 21 in the World Cup and have won four and drawn one game. They will be hoping for a win on this day to get their tournament back on track.

23:06 hrs IST: Argentina’s hopes rest on Messi, Sergio Aguero and it will be interesting whether they play Paolo Dybala in place of Angel di Maria, who had a poor game against Iceland. The buzz before the game is that di Maria might miss out.

23:00 hrs IST: A warm welcome to the big game between Argentina and Croatia in the FIFA World Cup 2018. The equation is simple for Lionel Messi’s side. A draw or a loss in the game today makes their path easier. A win will throw the whole group wide open while for Croatia, a win today seals their spot in the last 16.

Over the past few days, most Argentine fans have camped in Moscow, where Lionel Messi and his men played their opening game against Iceland and from where it is easier to access both Nizhny Novgorod and Saint Petersburg, the venues of their other two group games.

“All our friends are currently in Moscow and we have booked places to stay here for the first two weeks, so we will go to Nizhny and Saint Petersburg on the day of the games and return immediately after,” said Leonardo, who has travelled from Buenos Aires and will stay for the whole tournament.

For Croatia, a win against Sampaoli’s team will guarantee them a spot in the next round and most likely seal the top spot in the group.

The team’s build-up to the game against Argentina has been marred by the departure of forward Nikola Kalinic after the player refused to come on as a substitute against Nigeria owing to what he claimed was an issue with his back.