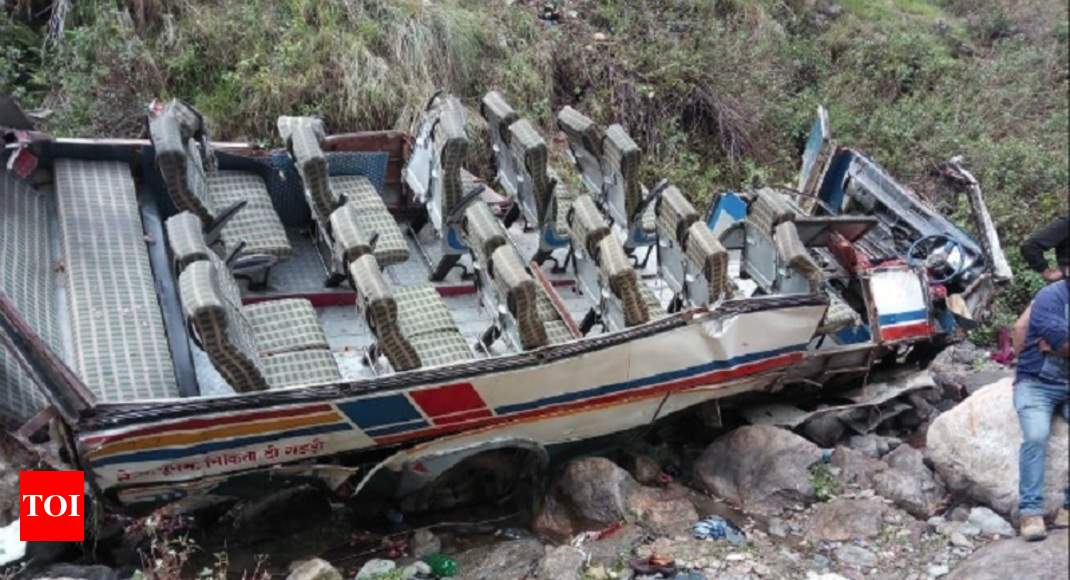 DEHRADUN: In one of the worst road accidents in Uttarakhand in the recent past, 48 people were killed and 12 others injured on Sunday after an overloaded bus they were travelling in fell into a 100m-deep gorge in Pauri district when the driver swerved to avoid a pothole. Three of the injured are critical and have been airlifted to AIIMS Rishikesh.

The 28-seater bus was carrying 60 people, all residents of Pauri and Nainital, from Bamnisain (Pauri) to Ramnagar (Nainital) when it plunged into the gorge at 8.15 am. The deceased include 16 women and 10 kids. An ex-Armyman who owned the bus and was driving it also died.

Deepam Seth, IG (law and order), said, “The accident took place near Gween village, 10km ahead of Dhumakot town on the way to Ramnagar. We have recovered 45 bodies while 12 people have been injured. Police teams and State Disaster Response Force are carrying out relief and rescue operations.”

The officer told TOI that 45 passengers had died on the spot while three succumbed to injuries during treatment at the primary health centre in Dhumakot. Those injured have been admitted to Susheela Tiwari hospital in Haldwani, while three who were in critical have been airlifted from Ramnagar to AIIMS Rishikesh.

IG Sanjay Gunjyal said that bad weather hampered rescue operations. The teams faced difficulty in airlifting the injured as the rescue chopper could not land at Dhumakot due to inclement weather and landed at Ramnagar instead.

According to those injured, the driver was trying to avoid a pothole on the road when he lost control of the vehicle, said ADG (law and order) Ashok Kumar. “The pothole, which covered half of the road, is the primary cause of the accident. Also, the driver could not control the vehicle as it was overloaded,” said Kumar.

The bus was part of Garhwal Motor Operators’ Union (GMOU), which runs buses in far-flung areas in the hills where the public transport network is poor.

Meanwhile, CM Trivendra Singh Rawat has announced a compensation of Rs 2 lakh for kin of those who died in the accident and Rs 50,000 each for the injured.

PM Narendra Modi also paid his condolences. “Extremely saddened by the bus accident in Pauri Garhwal in Uttarakhand. My deepest condolences to the bereaved families. I pray that those injured recover at the earliest,” PM tweeted.