It must be election season because the chimera of ‘EVM tampering’ has surfaced again. This fake narrative, based on wild allegations, has grown to become an indispensable feature of elections since the Narendra Modi government came to power. It duly emerges during election time and depending on whether BJP wins or loses, either escalates or vaporises into thin air. For instance, EVMs were alright when Arvind Kejriwal’s party swept Delhi in 2015. EVMs became “tampered” when AAP lost MCD polls two years later.

The peddlers — a motley crew of Opposition parties and a section of the media — either have no memory of elections in pre-EVM days or worse still, they do and that’s exactly why they want to turn back the clock. They have not even an iota of evidence to back their charge but who needs proofs when accusations are a self-serving mechanism? If even a fraction of the young and first-time voters who weren’t born during those paper ballot days of large-scale rigging and booth-capturing are taken in by the nonsense, their objective will be met. 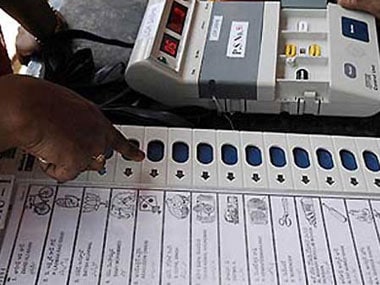 At the heart of this fake narrative is a clever conflation between machine malfunction and manipulation. This conflation seeks to tap into our unawareness and insecurities over technology and trigger doubts about the fairness of an election process conducted by the Election Commission of India — an independent and autonomous constitutional body. The frolic of fakery isn’t just mudslinging. It is a calculated and cynical attempt to undermine a robust public institution by lowering people’s trust in it.

Be it the judiciary, ECI and/or other autonomous bodies, it has been the Opposition’s standard operating procedure to weaken institutions through machinations and illogic to feed their narrative that Modi government is “destabilising institutions”. It is a classic syllogistic fallacy where deductive reasoning is inverted to suit the cause. BJP’s dominance may have led the frustrated Opposition to explore these deranged options but they have been aided in their mission by a section of the media who shares their visceral hatred of Modi.

This cabal’s hatred for Modi’s political dominance has reached such obsessive proportions that it would rather spin fantastic conspiracy theories and level outlandish allegations against public institutions than see the absurdity of it all. These fake outrages could be temporal but little by little they serve to harm institutional credibility in a democracy which already suffers due to the weakness of its institutions.

Did machine malfunction take place during the byelections on Monday? Yes, it did. In some Lok Sabha and Assembly seats such as Kairana in Uttar Pradesh and Bhandara Gondiya in Maharashtra, the ECI had to replace 20.8 percent and 19.22 percent of all VVPAT machines, respectively. That is an unusually high number. Does that mean there was manipulation? No.

Chief Election Commissioner OP Rawat pointed out that last instance of “a large-scale VVPAT malfunction” was witnessed during Punjab Assembly polls. “In one constituency, it was as high as 35 percent. In most constituencies that went to bypolls today, VVPATs were used for the first time,” he was quoted, as saying by The Times of India. Incidentally, Congress formed a government in Punjab after beating BJP and its ally.

From CEC’s statement and comments from polling officials, it seems that unfamiliarity with these new VVPAT machines led to their mishandling by untrained superintendents, following which many devices developed faults. It is certainly disconcerting because it held up voting and in many cases, it may have led to voters getting discouraged from casting their ballots by the time engineers could fix the snags. Notably, this was a bipartisan complaint levelled by both camps.

There was massive technical snag in the EVMs and total breakdown of systems. My supporters went back without voting as machines were not working. My party leaders have approached the EC regarding the matter: Mriganka Singh, BJP Candidate from Kairana  Lok Sabha bypolls

To the extent that this affected overall voting percentage, the ECI is responsible and it must move swiftly so that these errors can be minimised. Notably, however, EVM malfunctioning was well within the normal range of one percent and it is the newly inducted VVPAT machines that developed snags, which suggests a strong correlation between errors and lack of adaptation to new techniques.

Also, note how the disinformation campaign was spread via a confusion between EVMs (which did not malfunction) and VVPAT machines (which did).

When @Saurabh_MLAgk and I were raising the issue of EVMs along with VV Rao , the ECI would tell us , that EVMs can work in any extreme  weather …Now they say malfunctioned coz of heat !! Test the failed EVMs ..No matter what u press , vote will mostly go to BJP.

Astounding to hear local EC officials citing heat as the reason for malfunctioning EVMs; we are bloody well a hot country folks! And next general elections are also in the summer! #bypolltest

The ECI has cited statistics to show that EVMs did not develop large-scale snags, and VVPATs did but this crucial difference was either glossed over or lost in translation. As for VVPATs, it must be remembered that polling officials and superintendents are not EC’s own employees but individuals who have (or are supposed to) received training. It is obvious that lacunae, if any, lies here. This may also adequately explain why large-scale malfunctioning was not witnessed in 2009 or 2014.

So did the EVMs not malfunction in the searing heat of the 2014 elections and the earlier polls in May 2009? Or is it that we are just noticing it now? Genuine question

The EVMs that were used till 2014 were not used here, so this comparison is redundant. The earlier machines were discontinued because these are incompatible with Voter Verifiable Paper Audit Trail (VVPAT) technology that “dispenses a slip with the symbol of the party for which a person has voted for. The slip drops in a box, but the voter cannot take it home. The voters see the slip for seven seconds, which would be an acknowledgement receipt for the party they voted for in the election.”

As can be adjudged, this makes for greater transparency and take manipulation possibilities (and fantastic claims such as “I pressed for hand symbol and got lotus instead”) completely out of the window. As for the reliability of VVPAT machines, here’s a relevant screenshot.

As the Election Commission clarifies in its FAQs on EVM’s security features: “M1 model of EVM machines were produced up to 2006 and were last used in 2014 General Elections. In 2014, EVM machines which completed 15 years of economic life and also because M1 were not compatible with VVPAT, ECI decided to discontinue use of all M1 EVMs manufactured up to 2006.”

The EC document also makes it pretty clear that ECI-EVMs are unhackable, are not computer-controlled. These are “standalone machines and not connected to the internet and/or any other network at any point in time. Hence, there is no chance of hacking by remote devices.” These cannot be manipulated by manufacturers, a trojan horse cannot be installed in the microchip, and cannot be “physically tampered with/their components be changed without anyone noticing”.

Even if, for arguments’ sake, we assume the impossibility that BJP somehow managed to manipulate the machines, doctoring a few thousand will not be enough. These will have to be done on such a huge scale to effect any real change on the ground that it is a logical and theoretical (leave alone practical) impossibility. If the BJP pulls off even this Houdini act, it doesn’t really need to hold elections, does it? It also is a mystery why the BJP would put itself through such a torture in Karnataka when all it needed to do was to seal seven more seats.

Instead of these bunkum theories and grotesque allegations, it will be worthwhile asking why some parties and some members of civil society and media advocate a return to paper ballots when studies have conclusively proved that “introductions of EVMs led to a significant decline in electoral frauds, particularly in politically sensitive states which were subjected to frequent re-polls due to electoral rigging, strengthened the weaker and the vulnerable sections of the society who were now more likely to cast their votes, made the electoral process more competitive whereby the winning margin and the vote share of the winning party declined.” (Brooking India report on The Impact of Electronic Voting Machines on Electoral Frauds, Democracy, and Development by Sisir Debnath, Mudit Kapoor and Shamika Ravi).

Democracy dies when ballot boxes are thrown into ponds, burnt or goons enter polling boothsto stamp on papers. It doesn’t die when a few machines malfunction. Let’s not lose our perspective or sense of proportion.