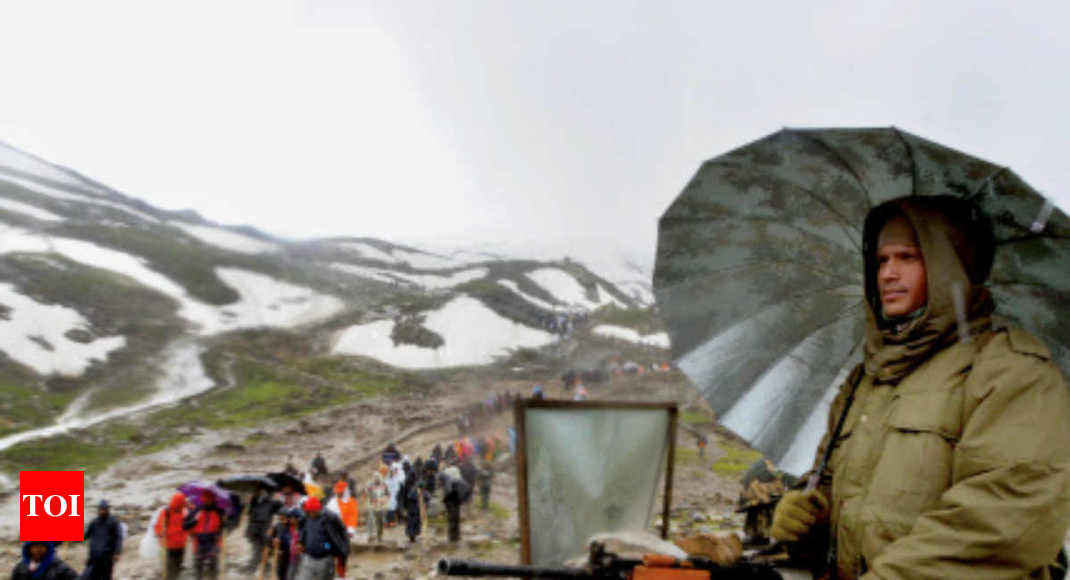 SRINAGAR: The authorities on Friday evacuated 326 Amarnath pilgrims, who were stranded at Panjtarni due to heavy rainfall, to the Baltal base camp.

“On the directions of governor N N Vohra, chairman Shri Amarnathji Shrine Board, to Shri Umang Narula, Chief Executive Officer of the Shrine Board, evacuation and rescue operations were launched to evacuate the stranded yatris,” an official spokesperson said.

He said the virtually non-stop rainfall over the past several days has adversely affected the track conditions, particularly on the Baltal-Sangam-Holy Cave route.

Besides landslides at several places, the maximum disruption has been caused by shooting stones and the sinking of the track at certain locations, the spokesperson said.

“As directed by the governor, sick pilgrims, as well as the aged and women yatris, were amongst the first to be airlifted when three Indian Air Force MI-17 helicopters started operating sorties from Panjtarni to Baltal,” he added.

The governor, accompanied by B B Vyas, advisor to governor, and Umang Narula, Chief Executive Officer, visited the Baltal, Panjtarni and Nunwan (Pahalgam) Yatra Camps for a first-hand assessment of the ground situation.

Later, Vohra convened an emergency meeting and issued a slew of directions with regard to the Amarnath Yatra.

He directed the BSNL to restore and immediately improve the quality of telecommunications at various yatra camps and enhance the bandwidth by Saturday.

The divisional commissioner was directed to keep a close liaison with the BSNL to ensure early restoration; representative of the Hindustan Petroleum Aviation was directed to provide refuelling facilities for the IAF choppers airlifting stranded passengers from Panjtarni; chairman J&K Bank was directed to install micro ATMs at Panjtarni and make available cash to the stranded yatris early tomorrow morning.

The development commissioner roads and buildings Srinagar and chief engineer BRO were directed to initiate immediate measures to provide safety from rolling stones at the affected track portions between Rail Pathri and Brarimarg by pooling resources.