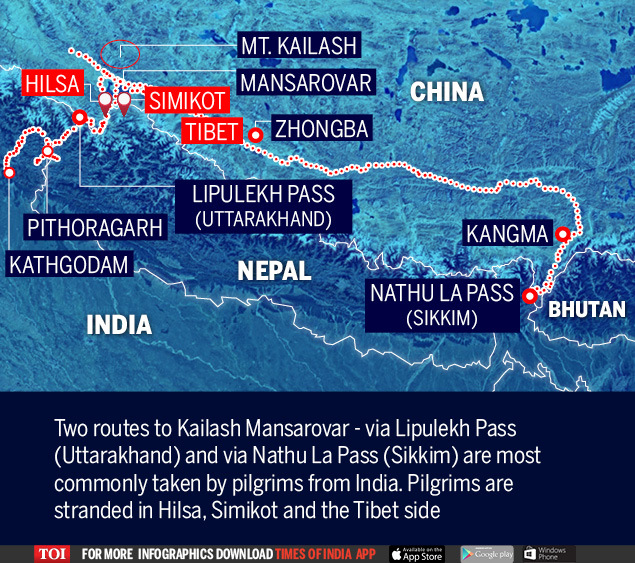 NEW DELHI: Three Indian pilgrims were reported dead and over 1,500 stranded in Nepal and Tibet on their way to Kailash Mansarovar as incessant bad weather disrupted the pilgrimage to the Himalayan lake.

The Indian embassy in Kathmandu is monitoring the situation along the Nepalganj-Simikot-Hilsa route of Kailash Mansarovar Yatra via Nepal while heavy rains made it difficult to operate evacuation flights.

Foreign minister Sushma Swaraj confirmed that about 525 pilgrims were stranded in Simikot, 550 in Hilsa and another 500 more on the Tibet side. “We have requested the government of Nepal for army helicopters to evacuate stranded Indian nationals,” Swaraj said on Twitter.

Official sources said the embassy in Kathmandu was able to evacuate about 150 pilgrims from Hilsa and Simikot. “While Hilsa is infrastructure lean, Simikot has decent boarding, lodging, communication and medical facilities,” said an official.

The embassy, with support from local airport authorities and flight operators, carried out nine commercial flights. The government said Indian authorities in Kathmandu were in touch with Nepal army which had kept a helicopter in a state of readiness to operate as and when weather improved.

PM Modi’s office said he was in touch with the foreign ministry as well as other officials concerned and had issued instructions to extend all possible assistance to the stranded Indians. “The mission sent a four-member team to Nepalganj on July 3 evening. The team will reach Simikot and Hilsa at the earliest and set up camp offices for assistance to stranded pilgrims,” said an official.

The mission has asked all tour operators to hold pilgrims back on the Tibet side as far as possible since medical and civic facilities on the Nepal side are inadequate.