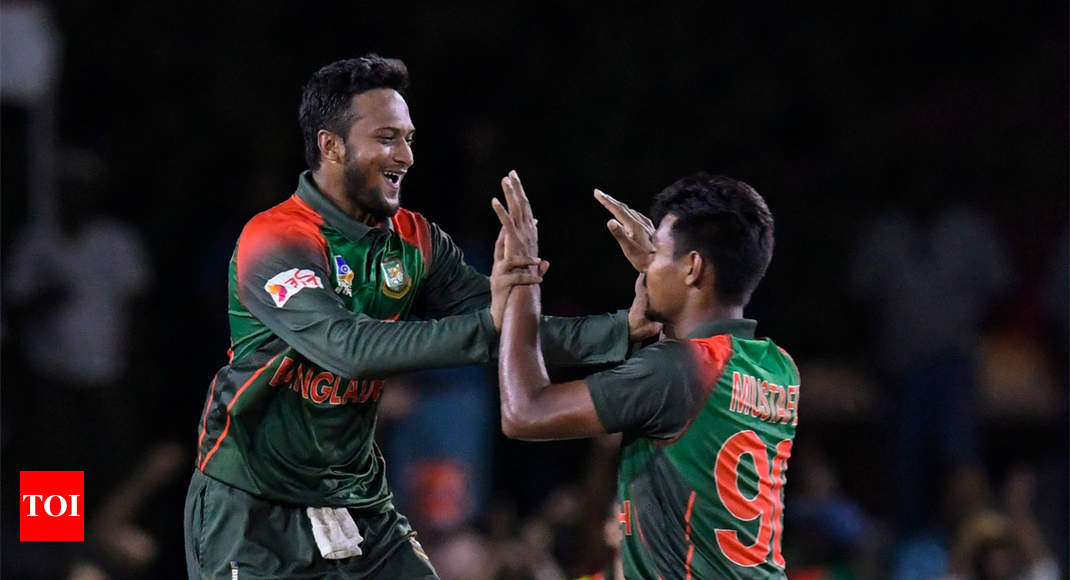 LAUDERHILL (United States): A fine all-round performance by Shakib al Hasan lifted Bangladesh to a series-levelling 12-run win over the West Indies in the second fixture of a three-match T20 International series at the Central Broward Stadium in Florida on Saturday.

Shakib belted 60 and senior opener Tamim Iqbal top-scored with 74 as the Bangladeshis posted a challenging 171 for five after they were put in to bat.

Needing victory to keep the series alive ahead of the final match at the same venue on Sunday, the captain then claimed the important wickets of Marlon Samuels and opposing skipper Carlos Brathwaite as the Caribbean side were restricted to 159 for nine in reply.

Mustafizur Rahman took three expensive wickets but it was left to spinner Nazmul Islam to bowl the critical final over of the match with the West Indies needing 15 runs for victory. Just two runs were conceded as Bangladesh kept the series alive and also ended a five-match losing streak in the format going back to the final of the tri-nation series against India in Colombo last March.

“We had a good team talk after that first loss and we came out for this match with a really determined effort,” Shakib said. “It was a good team effort overall and I expect us to continue with this sort of performance in the deciding match.”

Bangladesh were indebted to their two most experienced players in posting a competitive total with Tamim blazing 74 off 44 balls with four sixes and six fours while captain Shakib contributed 60 off 38 deliveries with one six and nine fours before he fell in the final over of the innings.

Spinner Ashley Nurse claimed two early wickets again and when all-rounder Keemo Paul removed Soumya Sarkar cheaply at 48 for three in the eighth over, Bangladesh were in desperate need of a substantial partnership.

Tamim, who earned the “Man of the Match” award, and Shakib provided just that with a rollicking stand of 90 for the fourth wicket off just 8.2 overs.

“I decided to be patient at the start and then accelerate later on,” said Tamim. “Shakib really played an important hand in support and his contribution was crucial.”

Despite innings of 43 from both opener Andre Fletcher and all-rounder Rovman Powell, the West Indies stuttered continuously in pursuit of the target and never seemed in control of the required rate, even with so many celebrated big-hitters in their line-up.

“I felt we were just too casual in the field and didn’t put it together with the bat as we usually would,” Braithwaite said. “We just didn’t seem to have the same intensity in the last match. We really shouldn’t have been chasing as much as we had to tonight.”

West Indies again experimented with Andre Russell at number three in the order but he fell cheaply this time around after being the match-winner in St Kitts. When Marlon Samuels fell shortly after to an excellent boundary catch by Liton Das off Shakib, Bangladesh held the initiative and never released their hold despite occasional flutters in the latter stages of the West Indies innings.