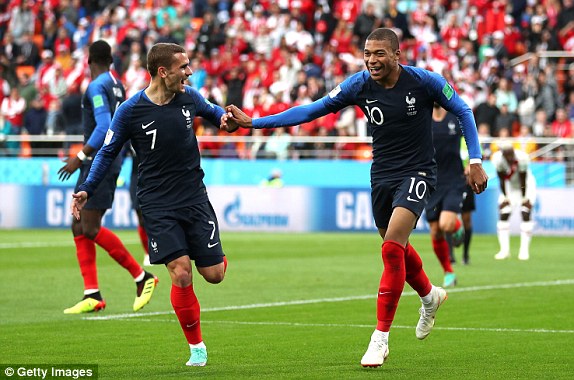 France must today avoid defeat against Demark to seal top spot in Group C, but their opponents are not sure of their own place in the knockout stages yet.

Christian Eriksen’s goal was not enough against Australia and the latter can steal second place with a convincing win over Peru if Denmark lose to Les Bleus.

Before you lock in your 2018 World Cup picks, you need to listen to European football expert David Sumpter. He is an applied mathematician who wrote “Soccermatics,” a book that explains how math works inside the sport. Together, with other experienced analysts, Sumpter developed the powerful Soccerbot model.

The Soccerbot reads current odds and all team performance data, calculates key metrics and predicts upcoming matches. In nearly three seasons since its inception, the Soccerbot is up an incredible 1,800 percent on bookmakers’ closing odds.

The model knows these clubs are well matched at Russia 2018 and will be highly motivated to top Group C.

France enters Tuesday match having already qualified for the round of 16. However, France will need at least a point to top Group C and avoid playing Croatia, a team coming off a dominant 3-0 victory over Lionel Messi and Argentina.

France has faced Denmark twice before in the World Cup, beating the Danes 2-1 in 1998 and losing 2-0 in their most recent meeting in 2002. However, France has beaten Denmark in six of its last seven matches overall. And Olivier Giroud has been in superb form against Denmark, scoring each of France’s last three goals against the Danes.