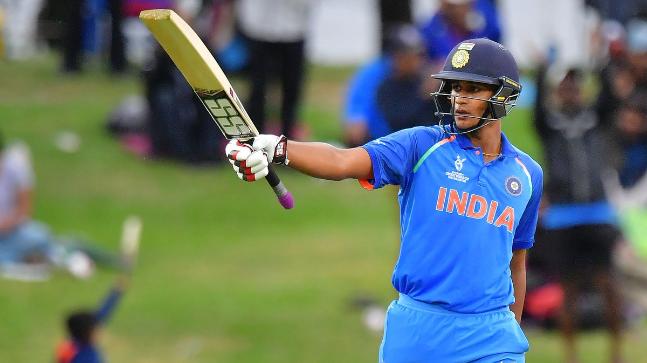 India beat Australia by eight wickets in the ICC U-19 World Cup final at Bay Oval in Mount Maunganui to lift their fourth title.

This is the most by any team in the U-19 World Cup — Australia are second with three titles.

Before this, India won the title in 2000, 2008 and 2012 under Mohammad Kaif, Virat Kohli and Unmukt Chand respectively.

Chasing 217 to win, India were off to a flyer with Prithvi Shaw and Manjot Kalra doing what they have been doing throughout the tournament. However, India’s chase was halted by rain after just four overs. India reached 23/0 with the openers Shaw on 10 and Manjot batting on 9 when the umpires decided to call the covers in.

But after the delay, the duo made sure there were no hiccups and showed great intent to bring their fourth fifty-run stand in the tournament. They continued the onslaught until Will Sutherland removed Shaw for 29 with India at 71/1 from 11.3 overs.

In came the in-form Shubman Gill and forged a good partnership with the attacking Manjot and took India past the three-figure mark in the 16th over.

The Delhi boy continued his attacking game and completed his fifty off 47 balls — his second half-century of the tournament.

The duo brought their 50 partnership up off 47 balls in the 20th over and took India towards the target as Australia looked helpless and desperate for a wicket.

But just when it was looking that India are running away with it, Param Uppal struck and removed the dangerous Gill for a 30-ball 31, leaving India at 131/2 from 21.2 overs.

However, Manjot steadied the ship along with wicketkeeper batsman Harvik Desai and kept India on top of the game throughout with India reaching the 150-run mark in the 27th over.

After a brief spell, where he kept quiet, Manjot again started to get on top of the bowlers — starting with a towering six of the bowling off Lloyd Pope in the 29th over.

Desai supported Manjot perfectly as India built another 50-run stand before the southpaw finally completed his century in the 39th over of the bowling off Sutherland to take India closer to victory after India’s 200 came up in the 36th over with a boundary from Desai.

Desai, who was dropped on 40 by Uppal, finally finished the game off with a boundary in the 39th over to give India the victory. This was also the first time Rahul Dravid lifted a World Cup.

Kalra remained unbeaten on 101 while Desai finished with 47 not out.

Earlier, India rode on a disciplined bowling effort to restrict Australia to a meagre 216.

Jonathan Merlo top-scored for the Australians with a steady 102-ball 76, laced with six boundaries even as the Indian bowlers complemented each other well to bundle out the opposition in 47.2 overs.

Electing to bat after winning the toss, the Australians lost their three top batsmen with just 59 runs on the board, thanks to pacer Ishan Porel’s twin strikes early on.

Thereafter, Merlo and Param Uppal (34) steadied the team with a 75-run fourth wicket stand which saw them going past the 100-run mark, before left-arm spinner Anukul Roy ended Uppal’s 58-ball stay with a brilliant catch in his own follow through.

Tottering at 134/4, Merlo was joined in by Nathan McSweeney (23), who added 49 runs for the fifth wicket before meeting the same fate as Uppal, this time caught and bowled by the other spinner Shiva Singh.

Despite losing his partners at the other end, Merlo continued to torment the Indians, raising his maiden half century off 60 balls by chopping a slower delivery from Porel for a single to sweeper cover.

Merlo, however succumbed under the pressure of scoring quick runs, when he attempted a reverse sweep off Roy only to manage a top-edge for Shiva to grab at sweeper cover, even as Australia’s hopes dashed after losing the last five wickets for just 33 runs.

(With inputs from IANS)