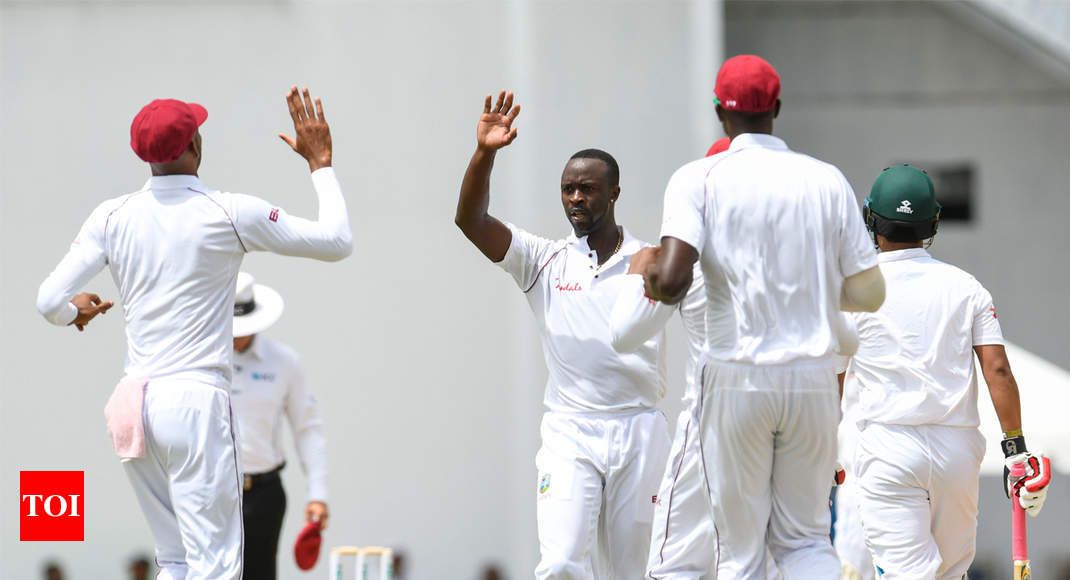 NORTH SOUND (Antigua and Barbuda): Kemar Roach took five wickets as West Indies demolished Bangladesh for 43, their lowest Test total, on the opening morning of the first Test in Antigua on Wednesday.

At lunch at the Sir Vivian Richards Stadium, West Indies had reached nine without loss.

Bangladesh’s pitiful performance was also the second shortest first innings in the 141-year history of Test cricket. At 18.4 overs, it was just one ball longer than Australia’s dismissal for 60 off 18.3 overs by England at Nottingham in 2015.

Put in to bat on the greenest surface seen in the ten years of Test cricket at the venue, the Bangladeshis were no match for the quality of the West Indies fast bowling.

Roach set the rout in motion by claiming the first five wickets for eight runs in just five overs despite appearing to be troubled by a muscular strain behind his right knee.

However, it was the visiting batsmen who felt the greatest discomfort with only opener Liton Das reaching double-figures in a performance that once again exposed the vulnerability of their players in conditions away from what they are generally familiar with on the Indian sub-continent.

Das was sixth out for 25, an ugly heave offering a simple catch to Roston Chase at backward point off Miguel Cummins to end any prospect of Roach claiming all ten wickets in the innings.

Cummins, whose place in the final eleven was in question after a lack of success in the preceding three-Test series against Sri Lanka, took two more wickets.

West Indies captain Jason Holder, fresh from a nine-wicket haul in defeat in the final Test against the Sri Lankans in Barbados, polished off the innings with the wickets of Kamrul Islam and debutant Abu Jayed.

Jayed was always in line for his maiden Test cap given the pitch conditions and the absence through injury from the tour of Bangladesh’s most effective seamer Mustafizur Rahman.

In his very first session of Test cricket, he came to the crease as the last man in the batting line-up and had first to use the new ball in the West Indies reply.

If they were relying on their most senior players to lead them through what was expected to be a tough opening session, Bangladesh were poorly served by the experienced quartet as captain Shakib al Hassan, former skipper Musfiqur Rahim and all-rounder Mahmudullah all failed to score while opener Tamim Iqbal contributed four runs before becoming the first wicket to fall, caught at the wicket, to trigger the swift tumbling of wickets.