BIRMINGHAM: There are defeats that hurt a lot, and this one will rank high on that list. The chances were there – both for India and Virat Kohli – to win a Test match that would have gone down in history as one of their best, but it was not to be.

England raised their game by quite a few notches on the fourth day and pulled off the 31-run victory that gave them a 1-0 lead in a series between two evenly-matched sides. For England on the fourth day, it was Ben Stokes (4-40) who did the damage, but it wasn’t just the lion-hearted all-rounder who won the hosts this Test.

On a beautiful fourth morning, with the sun out and a ball 36 overs old, the odds were slightly in favour of India just because Virat Kohli (51) was still at the crease. There was a sense of determination about the way he had gone about the job till the end of the third day and with 84 still to get, the hopes were on the higher side.

But for India to reach the target, it was imperative that someone was ready to battle it out with him. Dinesh Karthik (20) probably had the right intentions – he took his stance outside the crease like Kohli to deal with the swing – but the ability was lacking. And then, when there’s a James Anderson to deal with, it’s not easy either.

The king of swing induced an edge off Karthik in the first over of the fourth morning and India were on the backfoot straight away. But it was the next 45 minutes of play, with Anderson and Stuart Broad in operation, that did the spadework for Stokes.

They were relentlessly accurate on the off-stump line, probing Kohli and Hardik Pandya, who was ready to buy his time. But the England bowlers were able to keep Kohli off strike and in the first half hour, he played only five balls. It meant that the runs were coming in trickles and there was no release of pressure.

It was only towards the end of Anderson and Broad’s spells that a couple of boundaries leaked and the Indian fans, well decked up to celebrate a victory, found their voices. But what Broad and Anderson did in those spells of intense scrutiny was to tire out Kohli and Pandya mentally. The fact that Kohli had to score the bulk of India’s runs over the last three days didn’t help his cause. The moment Stokes came on to bowl, the captain felt he would have to try and score a few runs to get closer to the target.

But Stokes was right on the mark from the first ball and while Anderson was swinging the ball away, Stokes got it to come in. Kohli probably saw an opportunity there but missed one that cut in off the seam and was caught plumb in front.

India were still 52 runs adrift and everyone in the ground knew it was a bridge too far. Mohammad Shami left in the same over and it was all down to Pandya (31) to take the battle to the rival half. Ishant Sharma too showed signs of a fight, but Root took a bit of a chance bringing in leggie Adil Rashid, who hadn’t had too much to do till then. He landed a googly in his first over of the day to remove Ishant and it was all but over. The curtains came down soon after, with Stokes getting Pandya to nick one. The morning, that promised so much for India, melted into an afternoon of all-too-familiar disappointment. 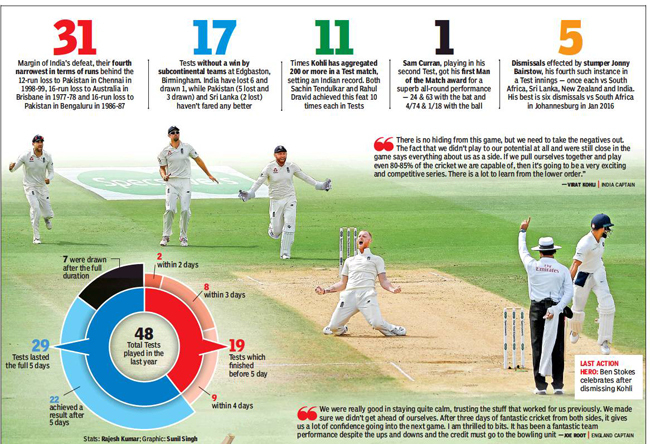