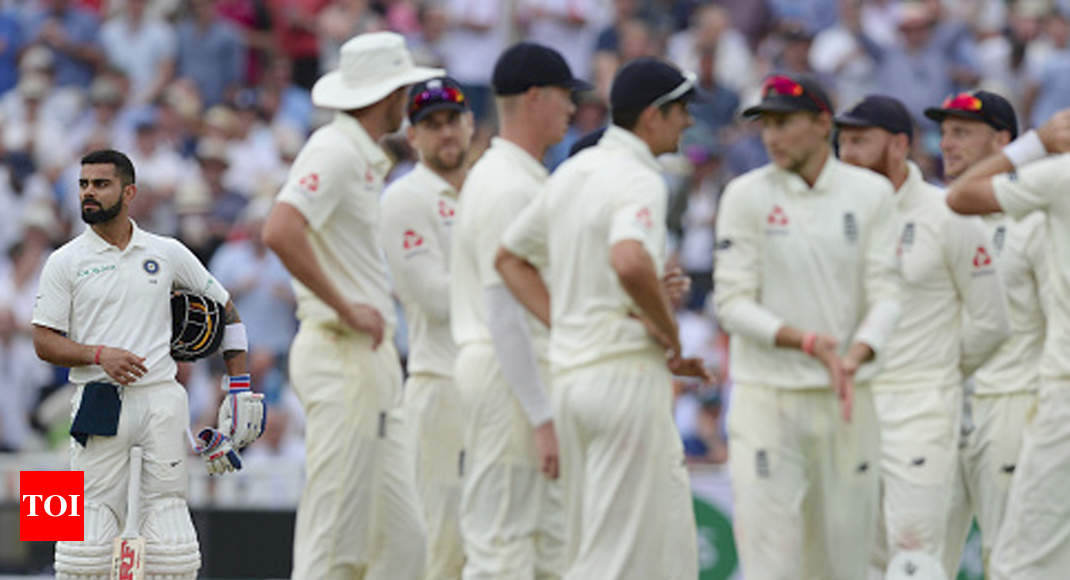 BIRMINGHAM: Chasing a coveted Test victory on English soil, a nervy India ended the action-packed third day of the first match at a precarious 110 for five, still 84 runs adrift from a tricky 194-run target on Friday.

India allowed England to put on board 180 runs, despite having them on mat at 87 for seven at one stage with Ishant Sharma (5/51) and R Ashwin (3/39) troubling the home batsmen in the first two sessions.

It was young all-rounder Sam Curran who bolstered the England second innings with a fighting 63-run knock, which came off just 65 balls with nine fours and two sixes.

England pace battery, led by Stuart Broad, gobbled up half the Indian batting line up under favourable overcast conditions as the visiting batsmen were either reckless with their shot selection or got too good deliveries to counter.

Kohli, who turned it around for India in the first innings with a combative 149, now stands between victory and defeat for the visitors.

The defiant Indian captain, who saw his batting colleagues perishing one after another, was batting on 43 and giving him company was a disciplined Dinesh Karthik (18) when the stumps were drawn for the day.

They added 32 runs for the unbeaten sixth wicket, playing with maturity.

The Test still hangs in balance with the first session tomorrow holding key for both the sides.

England did not have to wait long for their first breakthroughs as Broad (2/29) trapped Vijay and had Shikhar Dhawan (13) caught behind.

KL Rahul (13) did not look too comfortable at the crease, and fell to Ben Stokes (1/25) just as his third-wicket partnership with Kohli was starting to take shape.

Kohli survived a hairy lbw shout against Sam Curran (1/17), but DRS showed the ball sailing over middle stump. But the left-arm young pacer was able to nab Ajinkya Rahane (2), caught behind shortly afterwards.

India tried a different approach to stop the downcurve, and R Ashwin (13) came out to bat at number five. He lasted less than four overs before Anderson came back to turn the game in England’s favour once again.

Karthik and Kohli though dug in deep, especially the former, and made sure that the seesawing game went into the fourth day.

Earlier, Ishant Sharma took his eighth five-wicket haul while R Ashwin (3-59) and Umesh Yadav (2-20) shared the other five wickets as the Sam Curran’s valiant fight back went in vain.

Post lunch, Sharma didn’t allow Jos Buttler (1) to get settled, nicking him off on the second ball after resumption of play.

In doing so, he put on 48 runs with Adil Rashid (16) for the eighth wicket. It was the only passage of play on this third day wherein English batsmen looked comfortable at the crease as Indian bowlers searched desperately for a breakthrough.

Curran played with maturity that belied his young age. It didn’t help that Dhawan dropped Rashid at slip off Yadav. Their partnership looked good for many more, but bad light due to heavy cloud stopped play for approximately 16 minutes.

Shortly on resumption, Yadav cleaned up Rashid’s off-stump in the 45th over. Sensing closure of the innings, Curran attacked the bowling, hitting sixes off both Sharma and Ashwin, as he reached his maiden Test half-century at a run-a-ball gallop.

He shielded both senior partners Stuart Broad (11) and James Anderson (0*) ably, but Sharma eventually broke through as the English innings came to an end at the stroke of tea.

This was after Ashwin ran through the top order as India reduced England to 86 for six at lunch.

Starting from overnight 9 for 1, England did not get much respite as Ashwin bowled non-stop from one end after dismissing Alastair Cook (0) previously on Thursday evening.

The left-handed batsman in the English line-up looked easy fodder for him as the wicket started taking a lot more turn this morning. In the eighth over, Keaton Jennings (8) was the first to go with KL Rahul taking a sharp catch at leg slip.

Joe Root (14) held the key to England’s second innings, and eventual course of the game, but Ashwin etched out the big wicket eight overs later. He broke the budding 21-run partnership between him and Dawid Malan (20) as Rahul held another excellent, low catch at leg slip.

It could have gotten worse, as Bairstow’s (28) first shot also landed close to Rahul’s hand. Three overs later, Malan (on 17) got a life when Shikhar Dhawan failed to latch on to a low catch at first slip off Sharma. But the left-hander never looked comfortable at the crease with Sharma constantly troubling him.

Malan and Root added 31 runs for the fourth wicket, and pushed England past 50 in the 17th over. The former looked to play more conservatively, while Bairstow opened up a bit to score at any opportunity he got.

Just when it looked that they were getting comfortable at the crease, Sharma struck a quick triple blow.

Rahane caught first Malan at fourth slip in the 27th over. Then in the last over before lunch, Sharma struck twice to dismiss Bairstow, caught at first slip, and Ben Stokes (6), caught at third slip, in the space of three balls.

England were completely rocked with only the tail left to play with Buttler, as they had no reply to Indian bowlers’ intensity.