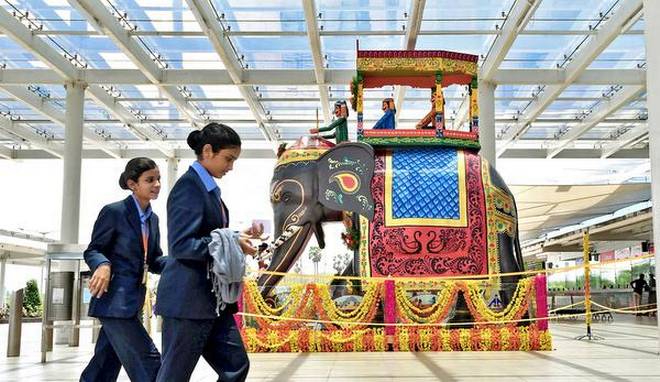 The hand-crafted Kondapalli toys by nimble-fingered artisans who carve characters out of light soft ‘puniki’ wood are famous world over. The colourful toys travel across the length and breadth of the country and outside but the state of their makers is anything but bright. The initiatives launched to help the artisans of Kondapalli village to find a market for their products have not found response on the expected lines.

The Andhra Pradesh Tourism Authority (APTA), as part of its efforts to promote Kondapalli toys that also reflect Andhra culture, has embarked on a unique initiative. It has installed an 18-ft-tall image of a colourful ambari elephant, one of the famous toys in the Kondapalli collection, in front of the departure block of the international airport at Gannavaram.

Chief artisan Rangachari from Srikalahasti, along with half-a-dozen other artisans, worked on this 4-tonne statue that has cost around ₹10 lakh. The entire statue is carved out of wood.

APTA CEO Himanshu Shukla, after the formal inauguration of the statue, said the idea was to create a mascot for Vijayawada city.

“Amaravati has Buddha statue, Visakhapatnam has beaches and Tirupati has Venkateswara temple. Vijayawada did not have a mascot of its own and we thought the ancient craft of Kondapalli toy would be ideal for the purpose,” he said.

Pointing to the fact that nearly 4,000 people from various walks of life and different destinations touched the airport which operated nearly 20 flights, he said, “This place is the gateway to Vijayawada city. This ambari elephant statue standing here in all its glory will create a curiosity among the tourists and may take them to the toy-makers’ village, thus promoting the art and the artisans,” he said.

Airport Director Madhusudan Rao said the statue would be a big attraction for people visiting the airport. He thanked the Tourism wing officials for the move which, he maintained, would in turn help the artisans of Kondapalli village.